Home  >  Book Review: The Girl With The Dragon Tattoo by Steig Larsson 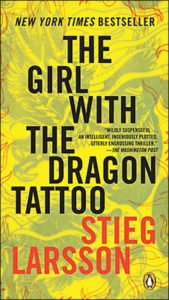 Do you like fiction? Better yet, do you like a good mystery? One that grabs you from the very first sentence and makes you hold your breath throughout until the last word? I recently read one of those. And if you are a mystery lover then you know those kind of books are few and far between. I had seen The Girl With the Dragon Tattoo by Stieg Larsson in the bookstores, online, just about everywhere but had resisted the urge to pick it up for some reason. When I finally gave in to all of the hype about the book, I was so glad I did. I could not believe a flawed hero and kick-ass heroine with too many problems to count could become the greatest crime-solving team in recent history. I have been telling everyone I know to RUN, don’t walk, to get this book.

So after I read Mr. Larsson’s first book in what is called the “Millenium Trilogy” I had to know more about this author. I wanted to read everything I could get my hands on of his. Unfortunately, he passed away of a sudden heart attack in 2004. His whole trilogy is being published posthumously. Not only did I discover he was from Sweden, but he was the chief editor of Expo, an anti-fascist magazine published in Sweden. His life reads like a James Bond movie; it’s no wonder he could write Lisbeth Salandar’s character with so much life!