Home  >  Book Review: A Fireproof Home for the Bride by Amy Scheibe 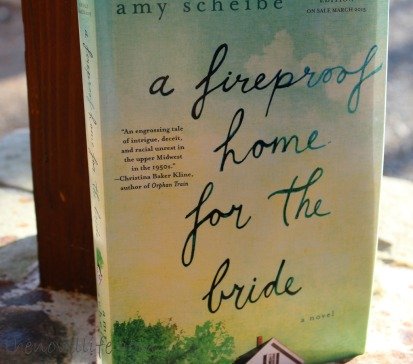 A slow, yet methodical, building of the plot to an ultimate firestorm;

A coming-of-age novel with a strong female lead;

Issues of family secrets ~ how do you handle learning the people you love are not who you thought they were?

Racial tensions ~ the white man against anyone not white, male and Protestant.

Religious intolerance ~ strong intolerance by the Lutherans of the Catholics; I can’t even pretend to understand the conflict here, but I think that’s the point.

Why I Read A Fireproof Home for the Bride  the charm of the 1950’s with secrets & struggles & enough family strife to make it real + a heroine worthy of cheer = yes, please, give me more!

What I Would Have Liked Better Having read this one in a couple of days, it’s apparent that there wasn’t much I didn’t like!  The ultimate firestorm was a bit over-the-top taking away from the believability of the story but not so over-the-top that I didn’t want to finish.  At times it was hard to keep all of the characters straight between the Brann’s and the Nelson’s and which belonged to which family and then throw in her father’s extended family and it got to be a bit confusing.  I muddled thru, obviously!

Please Give Me More The characters were so fully drawn I felt I knew them.  I’ve always heard that Midwesterners were hard workers, especially the farmers.  The author did a fabulous job of making these Midwesterners real, not stereotypical – she showed  us rather than told.  I lived on my grandparents farm for a few years growing up and I know it’s hard work, long hours with very little pay.

Interesting to Note  I was not aware the Klu Klux Klan had such a prominence in Minnesota during the ’50s or that Mexican field workers from Texas would migrate to Minnesota to work the farms & in the sugar beet factories.  Fascinating the things one can learn from fiction!

If you liked The Swan House or The Boston Girl then you may enjoy A Fireproof Home for the Bride. Recommended.

What book have you read recently where you learned something new about history?