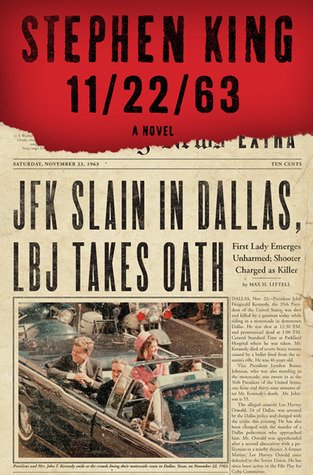 The past is obdurate.
I don’t watch horror movies. I don’t read horror books. And up until 11/22/63 I did not read Stephen King.  However, this book intrigued me, especially after reading so many positive reviews.  And of course I wanted to learn more about what might have happened in the world had JFK not been murdered.
Jake Epping is an every-day man.  He teaches high school English, enjoys his job and his students, and has a quite unusual friend in Al Templeton, the owner of a small diner Jake frequents.  Al approaches Jake with a strange tale and request one afternoon ~ Al tells Jake he has been traveling back in time to 1958 for years, and he wants Jake to try out the travel stairs.  Jake does not believe Al until he walks down the stairs in the back of the diner and finds himself in 1958 where times are much simpler in many, many ways.  But when Jake returns to 2011 he almost does not even believe the trip happened.  Al shares with Jake that he is dying of lung cancer and was not able to finish the “job” he started in the past ~ the job of stopping Lee Harvey Oswald from killing President John F. Kennedy.  Al begs Jake to go back in time and stop Oswald, which Al believes would change world history for the better.  Al gives Jake a drivers license, money and credentials to become George Amberson in the past…..but Jake does not want to take on the task…..until Al leaves him with no choice.
The past harmonizes.
My Thoughts:
All of last year I read over a hundred books but did not find a favorite, one that I could see myself reading again for the pure love of the story.  Believe it or not, the last book I loved that much was The Help, which I read in 2010!
Then comes 11/22/63…..In Jake Epping I found a man who was put into the most unusual circumstance of which he had to make the best of.  His character is one that grows throughout the novel – when he finds himself in a life he never imagined and discovers the best and the worst in himself.  I think this is where many of us are – in a life we never imagined for ourselves but finding out how to make the best of it…..while discovering the best and worst in ourselves.
When I heard about this book and how the main question is what would have happened if JFK had not been killed that Friday afternoon in Dallas, November 22nd, 1963, I had to get over my fear of Stephen King and read this darn novel!  I have always thoroughly enjoyed what-if books and wondering truly what would have happened had this not have happened…whatever “this” is.
11/22/63 has stayed with me, haunted me, created long discussions with friends and family….and I have found that I am now in love with Stephen King and his ability to draw me into the story, fall in love with the characters and obsess about what is going to happen next!  Stephen King was able to take me from tears to laughter to anger and disbelief with in a matter of pages.  And while Jake was George Amberson in the past, I felt like I was right there along with him – paying only a fraction of the price for goods and services in that time period.  I kept asking my mom, who grew up during that time period, about different prices and historical occurrences and discovered that Stephen King had all the facts down pat!
And let me just share this with you – if you are able, I strongly recommend listening to the audio version of 11/22/63.  Narrator, Craig Wasson IS Jake/George.  Wasson had a distinct accent for every single character in the book and his timing was spot on.  At the humorous parts of King’s tome, Wasson had me laughing out loud.  Wasson’s ability to go from a strong Southern accent to a nasal Northern accent to a thick African American accent had me listening every possible moment I could.  This audiobook was the best I have ever listened to, and I am now one of Wasson ‘s biggest fans….along with Stephen King’s!
In a Word: Bittersweet
Additional Reviews and Opinions: Book Bloggers Search Engine